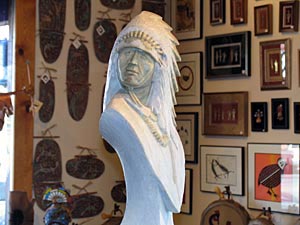 Ed Yazzie is a member of the Navajo tribe and with his family resides on the Navajo Nation. “Art has always been a part of my life,” states Ed. His mother is a Navajo rug weaver and both his parents worked as silversmiths for a time in their lives. From an early age he was involved in drawing, crafting and sculpting.

It is amazing to see the intricate details and quality of Ed’s work, who is a self-taught artist who has been sculpting for sixteen years. His first carvings were people out of cottonwood roots. The decision to become a full time artist came after many years of working and doing sculpting part time. His sculptures tell a story about Ed’s determination, ability, devotion and eagerness to look beyond life’s challenges. “Sometimes I am in awe of my own creations and I believe the Creator has entrusted me with a talent and I want to make good use of it.”

Ed’s sculptures are a blend of contemporary and traditional forms of Native Americans and their lifestyles. Yazzie has received many awards at prestigious art shows, including Best of Show, Best of Category and Best of Division. He was featured in the 1994 summer issue of Utah Highways magazine.

My goal is to create unique, one of a kind sculpture for people to enjoy. The overall look and style of my work is a combination of artistic creativity and a reflection of the lifestyles, designs and hairstyles, of different Native American Groups. 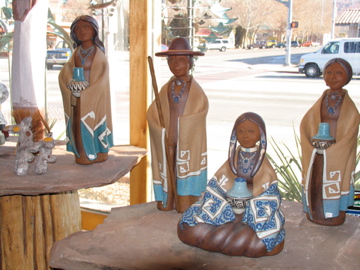 Each sculpture I create is unique. I begin with a slab of clay. I then form it into the shape for that piece whether it is a man or woman standing or seated. Most of the surface of each sculpture is the natural color of the clay. I often use as many as three different clays for each piece. The colors you see on my sculpture are a reflection of all the color choices available in high fire stoneware. The glazes are applied by brush, which is the most meticulous and exacting part of the final look of each piece.

Each sculpture has been final fired in a twenty cubic feet gas down draft kiln. This final firing is not an automatic procedure. They are fired to 2300 degrees in a reduction firing. This firing takes from 12 to 14 hours and must be monitored during the entire process. This type of firing is what gives the sculpture its rich earth tones on the clay and depth in the glazes. There are many factors that affect the firing some of which I cannot control, such as humidity and outside temperatures. This adds an element of uniqueness to all the sculpture that emerges from the kiln. I also take pride and comfort knowing that if not dropped or hit with something, my sculpture will endure for a thousand years and more.

Creating artwork has always been a part of my life. From early childhood, I have made things out of almost anything I could get my hands on. When I was in high school in Kettering, Ohio I was creating and selling sculpture out of cut up tin cans from my parents garage. I attended the Art Institute of Pittsburgh, earning an associate degree in commercial art. After graduating, I succumbed to the lure of the west and moved to Tucson, Arizona. I worked for three years as a graphic artist, but my desire to create original art pushed me to leave the security of a job and struggle as a painter, working in oils and watercolors, after several years with only marginal success, I enrolled in a ceramics class, which changed my life. The beginnings of my sculpture today began in my head. I have set out to learn and I am still learning the technical knowledge I need to shape the medium to fit my ideas. With my studio and kilns at my home, I can continually experiment with new methods and techniques.

Mr. Hone has an educational background in Art. He received his Associates Degree from Weber State College in Ogden, Utah; and a Bachelor of Science Degree in Art Education from Brigham Young University. He later earned his Master of Fine Arts Degree from Utah State University in sculpture and drawing. 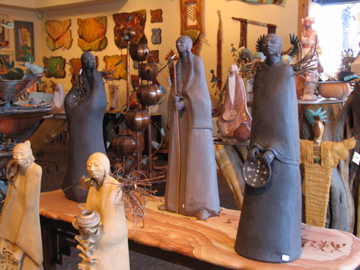 An interest in sculpture and abstract elements of art led to some of his earlier welded metal projects. Painting with watercolors came next in his progression. While still concerned with the abstract elements of art, he has again moved into the field of sculpture with Native Americans of the Southwest making up a major portion of his work. His works have been displayed in many galleries and are included in various private and public collections.

Lynn’s clay figures are created from stoneware clay and are numbered, limited editions. Unlike bronze editions, each of these is handmade. Lynn uses a molded form to get the basic shape of the body. He starts each sculpture by pressing slabs of clay into the basic body-shaped mold, then models the head and hands individually, and then attaches them to the body while the clay is still workable. The small decorative baskets are wheel-thrown. 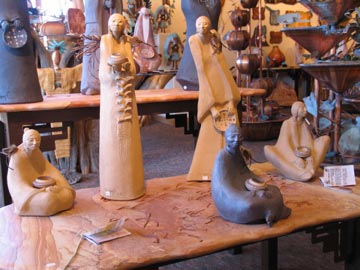 After the piece is completed it is set aside to dry from one to two weeks prior to the initial or bisque firing. The bisque figures are then decorated with an oxide wash. The dark figures are covered completely with iron oxide wash. The lighter-colored figures are left unfinished with the exception of the decoration of the held basket. The figures are then placed in a gas kiln for a final reduction firing. This kiln firing reaches stoneware temperatures of 2360 degrees. Each sculpture is numbered as it is completed. That number is engraved on the piece just above the number of the edition size. It appears to the left of the artist’s name on each sculpture.